Behind the Stacks
News from the Reference Library

It's a new year and time for a fresh look at Panhistoria's Reference Library. There's been a lot of activity lately in The Middle Ages and the Scotland sections as well as some interesting new posts in The American Civil War section. Come visit!

As always, your Librarians are here to help and encourage you. Please feel free to direct your questions or ideas to any of them. Just look for the purple icon on your IM Panel.

Humans are forever trying to reform or improve their lives. Each fresh start builds on what has come before and will in turn become a new foundation for future change.

One method of starting anew is through revolution. Pan's Library has information on The Russian Revolution and The Fall of the Bastille. Europe was greatly affected by The Unification of Germany in the mid-1800s and in more recent history by The Fall of the Berlin Wall.

An effective but more peaceful method of change is through innovation. Check out the Inventions That Changed the World in the Industrial Revolution section or learn how America united her vast continent with the completion of The Trans-Continental Railway.

Fresh ideas and beliefs also play a part in new starts. Examine some of the Early Documents of the American colonies which illustrate progress toward a new form of government or read the Biography of Martin Luther, one of the strongest advocates for changes in the Catholic Church.

The first Roman libraries were divided into two sections - one for Greek texts and one for Latin texts. Often these were two separate rooms connected by a court which usually contained statues and would have been used as a reading room. In the early 1600s when the major humanist libraries began to be organized, this same double library plan was revived. Now you know. 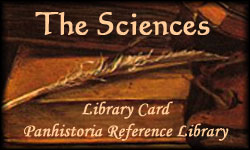 Interested in scientific matters? Visit The Sciences section of the Reference Library!

Explore the Universe. Discover Our Own Planet. Debate the Ethical Issues raised by scientific advances. Learn about the Early Scientists whose work paved the way for modern scientific accomplishments. Most importantly, keep abreast of Breaking Scientific News.

It's all here in The Sciences section of our Library!

The Reference Library is a proud sponsor of Pan's own library novel. Enter your favorite books - Through the Pages!

A great library is the most important element in the formation of a great university.

As the new year begins, take some time to explore Pan's Reference Library. Feel free to add a post or two - any member may post in our Library! We look forward to hearing from YOU!