Behind the Stacks
News from the Reference Library

Where does the time go? Here it is Spring already! Time for spring cleaning of course, and perhaps a little redecorating. Marie Curie has designed this charming banner for us! Show your support for our Reference Library and put one in your home today. Just click on the graphic to be taken to the post with the code to copy.

As always, your Librarians are here to help and encourage you. Please feel free to direct your questions or ideas to any of them. You can find their names listed in the Kiosk of each section of the Library.

Looking Back at the 20th Century

While most of our Library sections deal with the distant past, there are still many which focus on the recently past century.

In America, the middle years of the 20th century were overshadowed by the Korean War and the Vietnam War.

But the other side of the coin was great social change began in the Sixties. Relive 1967, the Summer of Love. Learn about the events of the Space Race.

From the Revolution in 1917 to the Fall of the Soviet Union, the events in Russia greatly influenced the whole world.

There was an explosion of interest in Science Fiction during the 1900s. People were fascinated by the possibilities of Technology, and by Aliens and Spaceships.

Come explore the 20th Century through the Reference Library!

Going back a couple of centuries, the most famous library in America in the 1700s was that at Westover Plantation in Virginia, the home of William Byrd. The shelves contained some thirty five hundred volumes. A close second was the library of Cotton Mather in Boston which contained three thousand volumes. Now you know.

For this issue of our newspaper, I want to feature two sections of our library - World War I and World War II. These two global conflicts ushered in many changes which continue to influence world events today.

WWI, The Great War, was going to be the The War to End all Wars. Not only did this war not end war but its innovations propelled warfare into the modern age.

Learn about the Land Battles and the new role of Airplanes during this war. Explore the Roles of Women in WWI. 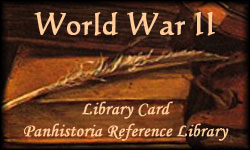 World War II was truly a global conflict and the power unleashed in Hiroshima and Nagasaki still affects our lives.

Read about The Leaders or The Tools of War. Join our discussion of The Camps and the End Game.

All these topics and more can be found in our two featured sections!

The Reference Library is a proud sponsor of Pan's own library novel. Enter your favorite books - Through the Pages! The members are currently embarking on a most interesting new storyline, and new writers are always most welcome.

Madam, a circulating library in a town is as an evergreen tree of diabolical knowledge. It blossoms through the year! And depend upon it, Mrs. Malaprop, that they who are so fond of handling the leaves, will long for the fruit at last.

Take some time today to explore Pan's Reference Library. Feel free to add a post or two - any member may post in our Library! We look forward to hearing from YOU!