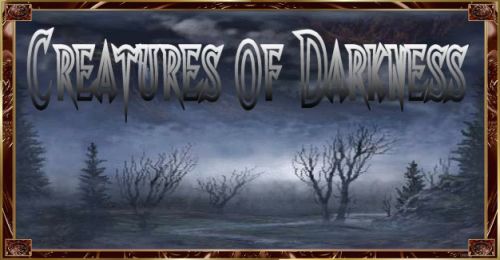 Creatures of Darkness are many.

Some are large, some small. Some have great powers, some can shape shift or fly. Some are creatures of the night. Some just walk when the Moon is bright.

Vampires, Ghosts, Demons, and more. When you roam the pages of Creatures of Darkness, these and many more will be your guides.

Created in 2002, the book came from my fascination for vampires and no place to place information about them in the library. I had planned to ask for a thread in Realm of Fantasy and Sci-Fi, instead Capt. Brown told me about Reference Books, a place for me to run with the fascination I had with vampire's, also to add others that roam the Darkness. Creatures was born.

When Pan Historia crashed in 2004, most of Creature's had been lost. Unfortunately I learned the hard way to back things up. Before that we had many people that contributed links, articles, information, on any and all types of Creatures. We also had a huge thread created by Mene Mayfair on Anne Rice. Few had given Creatures as much information as Mene had it was a real loss for the Book, one Mene has worked very hard to give back to the member's intact.

Through a lot of hard work, some of the threads now have more information than they once had. Slowly we've been building Creatures back up so the members of Pan with an interest in vampires and the other creatures, have a place to read about them, even research information for their characters.

We've worked to make Creatures of Darkness a place where you can find any and all creatures being of myth, legend or lore. I hope I've made it a diverse book that all enjoy. Creature's welcomes all new member's their idea's, and or suggestions can and has lead to a new place for other Creatures to roam.

If not for Capt. Dawg Brown, Creatures would have never come to be. I thank him for all the help he gave me in creating this Book, to all the member's that were instrumental in the creation of the book and it's rebirth, as well as my MOBster's who without there would be no Creatures..